Stars of Broadway, film, and television would regularly spend summers performing in the “Straw-Hat Circuit” (another name for summer stock). Below is a map that appears on the cover of the July 1934 issue of The Stage. Click on the small image below and a larger one will open in a new window. Then you can see the locations of the summer theatres where Basil performed.

On the southern tip of Maine you’ll see the town of Ogunquit, home to the Ogunquit Playhouse. Rathbone was there August 27 through September 1, 1951, performing in The Gioconda Smile, by Aldous Huxley. He returned to the Ogunquit Playhouse July 29 through August 3, 1957, playing the role of Sir Wilfred Robarts, Q.C. in Witness for the Prosecution by Agatha Christie.

Follow the coastline south into Massachusetts. Along the north shore there is a town called Marblehead. It’s not marked on the map, but is located south of Gloucester and Magnolia and north of Boston. Basil Rathbone performed at the Marblehead Summer Theatre in 1955. The play was The Winslow Boy by Terence Rattigan. Rathbone played the attorney, Sir Robert Morton, and also staged the play. 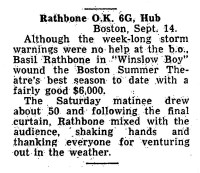 Basil was also in The Winslow Boy at the Boston Summer Theatre in Boston, but it was the previous summer—1954. The play was produced in September, probably September 6-11. On Sept. 10, Rathbone wrote to a friend, “Our play has been badly hurt by the hurricane & bad weather. We had such splendid review & were hoping for a profitable week.” Basil was probably referring to Hurricane Carol, which caused a great deal of damage in the Boston area around September 1. Hurricane Edna followed closely behind, but didn’t hit Massachusetts until September 11, which is after Basil wrote his letter. September 11 was, however, the date of the Saturday matinee mentioned in the article from Variety (September 15, 1954).

Basil returned to Boston July 21-26, 1958, to appear in the production of Terence Rattigan’s play Separate Tables.

Several resort towns can be found on Cape Cod (southeast of Boston). The town of Dennis is home to the Cape Playhouse, where Basil performed in Witness for the Prosecution from July 22 to 27, 1957.

Also on Cape Cod is the Falmouth Playhouse, in Falmouth (same general area as West Falmouth on the map). Rathbone performed there two summers in a row: August 12-17, 1957 (Witness for the Prosecution) and July 28 – August 2, 1958 (Separate Tables).

Move west into Rhode Island, and you’ll see the town of Newport on an island in Narragansett Bay. Basil Rathbone appeared at the Newport Casino Theatre in The Gioconda Smile, July 9-14, 1951.

In 1957, Rathbone performed in another summer theatre in Rhode Island: the Theatre-by-the-Sea in Matunuck. Matunuck is a village located on the southern coast of Rhode Island, about halfway between Charlestown and South Kingston. It is below the word “idea” on the map. Basil appeared in Witness for the Prosecution, July 8-13, 1957.

At the Norwich Summer Playhouse in Norwich, Connecticut, Basil appeared in The Winslow Boy, Aug. 1-6, 1955. On the map, you can find Norwich just to the right of the waiter carrying two trays of beer bottles. 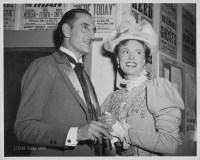 Basil Rathbone and Meg Mundy at the Westport County Playhouse

Along the southern coast of Connecticut, you’ll see the towns of Ivoryton and Westport (to the left of the boat). Basil performed in The Winslow Boy in both towns:

On Long Island, New York, which lies just south of the southern coast of Connecticut, we can find the town of Sea Cliff, which Basil Rathbone visited in 1955. He was in a production of The Winslow Boy, which played at the Sea Cliff Summer Theatre July 6-9, 1955.

Basil Rathbone performed in a few other summer theatres in New York State, most of which do not appear on the map.

There is the Country Playhouse (Watkins Glen, NY) located at the southern tip of Seneca Lake (one of the “Finger Lakes”). It is more or less in the middle of the state. Rathbone was there in 1951 to perform in The Gioconda Smile (July 24-29).

playbill for The Gioconda Smile at the Country Playhouse, Watkins Glen, NY

Following the run in Watkins Glen, Rathbone and the cast of The Gioconda Smile played at the Country Playhouse in Fayetteville, New York (July 31 – August 5, 1951). Fayetteville is close to Syracuse, on the eastern side. In 1955, Rathbone was again in Fayetteville, this time performing in The Winslow Boy, June 27 through July 2.

The 1951 summer tour of The Gioconda Smile included the Country Playhouse in East Rochester, New York (August 7-12). East Rochester is southeast of the city of Rochester.

August 15-20, 1955, Rathbone was at the Triple Cities Playhouse in Binghamton, New York, appearing in The Winslow Boy. Binghamton is south of Syracuse, near the Pennsylvania border.

Located in the Pocono Mountains in northeastern Pennsylvania, the town of Mountainhome is home to the Pocono Playhouse. The precise location is not marked on the map, but it is in the area covered by the pink flower above the word “PENNSYLVANIA.” Basil Rathbone did three plays at the Pocono Playhouse: 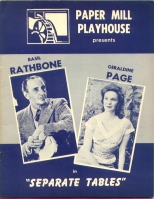 playbill for Separate Tables at the Paper Mill Playhouse

Oddly enough, one can barely find New York City on the Summer Theatres map from The Stage. If you look at the western tip of Long Island, you may be able to make out the words “New York City” printed on the area where the city is located. Just west of New York City (but east of the nudist colonies) is the town of Summit. Millburn, home to the Paper Mill Playhouse, is close to Summit, but not marked on the map. Basil was at the Paper Mill Playhouse a few times, including September 24, 1957 in Witness for the Prosecution and August 12- Sept. 6, 1958 in Separate Tables.

During the week of September 5, 1955, Basil was performing in The Winslow Boy at the Montclair Summer Theatre in Montclair New Jersey. Montclair is northeast of Summit, close to”Upper Montclair” on the map.

If you go south, basically to the bottom edge of the map, you’ll find the town of Trenton just to the left of the “Jersey Peaches.” Slightly north of Trenton (about at the arm of the bathing beauty in yellow) is Princeton. Basil performed in The Gioconda Smile at the Princeton Summer Theatre July 2-7, 1951.

Basil performed at a few summer theatres south of the area depicted on the map from The Stage. Here is a second map to show the locations of those theatres. 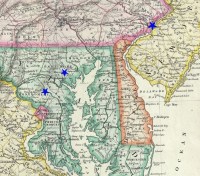 1958 saw Basil Rathbone in Philadelphia, at the Playhouse in the Park, Philadelphia. He appeared in Separate Tables. Philadelphia is marked with a blue star near the top of the map. Southeastern Pennsylvania is in pink; southern New Jersey in yellow; and Delaware in orange.

playbill for Separate Tables in Playhouse in the Park, Philadelphia

The state of Maryland is in green; Washington D.C. is a pink square. Blue stars indicate the locations of two more summer theaters where Basil performed. Just north of Baltimore in Lutherville, Maryland, one can find Swann’s Hilltop Theater. The Winslow Boy, starring Basil Rathbone, played there April 20-25, 1954. Perhaps that doesn’t count as Summer Stock, since it was in April.

Olney, Maryland, 10 miles north of Washington DC, is home to the Olney Theatre, where Basil Rathbone performed in The Winslow Boy, August 8-13, 1950. Rathbone returned to Olney in 1951, appearing in The Gioconda Smile (August 14-19).

I’ve given you an overview of some of the summer theatres where Basil Rathbone performed. There may be others yet to be discovered. 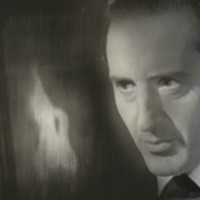 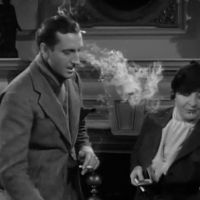 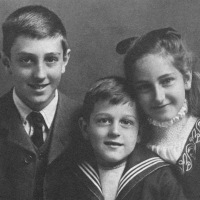 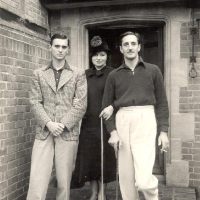 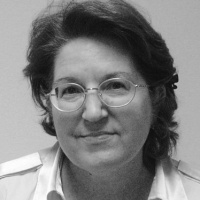 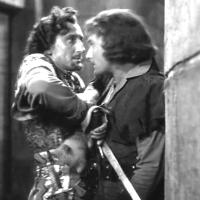 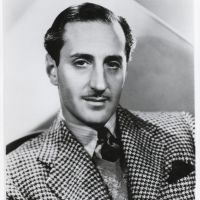 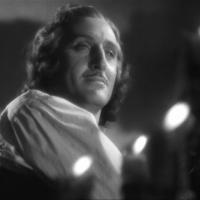