Basil Rathbone made a number of feature-length films — 81, if we include Crazy House, in which Basil Rathbone and Nigel Bruce had a 15-second cameo appearance. You can see that here:

But what do we know about Rathbone’s short films and documentaries? He made quite of few of those also.

Screen Snapshots was a series of short films (usually about 10 minutes long) produced by Ralph Staub (Columbia Pictures) between 1930 and 1958. Like newsreels and cartoons, they were shown in theaters before the main feature. Rathbone appeared in several of these Screen Snapshots, including:

Screen Snapshots, series 19, #5 (1940). Titled “Art in Hollywood,” this short film features Fritz Lieber, Basil Rathbone, Gale Sondergaard, Robert Wilcox, Florence Rice, Mary Boland and Fred MacMurray displaying their painting and sculpture hobbies. The 3 Stooges (Moe, Larry & Curly) collaborate on a painting, and wind up more painted than the canvas. I was not aware that painting and/or sculpture were among Basil Rathbone’s hobbies. He was an avid photographer, however, so perhaps “photography” was the art that Rathbone shared in the film.

Another series of short films similar to Screen Snapshots is Hedda Hopper’s Hollywood. Hedda Hopper was a Hollywood gossip columnist, who focused on what the celebrities were up to, and often exposed extramarital affairs.

Hedda Hopper’s Hollywood #6 is a 9-minute short made in 1942. Hopper covers two war benefit affairs, a garden party, and a USO fashion show held by Mary Pickford at her home (Pickfair). WW2 soldiers got to meet their favorite stars, eat and play games. A large number of stars, including Basil Rathbone, can be seen at this event.

Let it be known that alert is the word for both Glendon Allvine and the New York State Department of Commerce. Last week, “H2O—New York,” a half-hour length documentary, filmed in Kodachrome, written and directed by Mr. Allvine and produced by the N.Y.S.D.C., came out of the cutting room. The film, which has been in production almost from the time local burghers

became aware of the water shortage, deals, naturally enough, with our town’s water supply from source to consumer and the state’s varied waterways. Basil Rathbone is the narrator and, according to Mr. Allvine, in a sequence devoted to the Port of New York, “gives a reading of Walt Whitman’s poem, ‘Crossing Brooklyn Ferry,’ which has surprising modern phrasing.”  “H2O—New York,” he adds, will have its first showing soon at the Museum of Modern Art. Simultaneously it will be shown in a black and white version over a television network.

Art Treasures from the Vienna Collections (40 min.). Rembrandt, Vermeer and Velasquez are among the painters whose masterpieces are shown in this comprehensive footage of the Hapsburg art treasures. The commentary is written by Thomas Craven and narrated by Basil Rathbone. Art Treasures from the Vienna Collections was made in 1950 by Regency Productions, and filmed in New York, NY.

On loan from the Austrian Government, these paintings were exhibited in several art museums in the United States from 1949 to 1952. The “Art Treasures from the Vienna Collections” were on exhibit in the National Gallery of Art (Washington DC) from November 20, 1949 to January 22, 1950. The exhibit moved to the Metropolitan Museum of Art (New York City) for February 24, 1950 to May 21, 1950. Other U.S. museums that hosted this exhibit included the Art Institute of Chicago; M.H. de Young Memorial Museum (San Francisco); City Art Museum (St. Louis, Missouri); Toledo Museum of Art (Toledo, Ohio); Art Gallery of Toronto (Ontario); and the Museum of Fine Arts (Boston). By 1952 the exhibit had reached the Philadelphia Museum of Art (February 9, 1952 to March 30, 1952).

It seems likely that the film was made based on this traveling art exhibit, with Basil Rathbone acting as the docent. Since it was filmed in New York, it must have been at the Metropolitan Museum of Art.

The catalog that museum visitors could buy

The website of the National Gallery of Art (Washington DC) gives more details about the “Art Treasures from the Vienna Collections” exhibit:

Overview: Among 279 objects were 128 paintings by artists such as Titian, Jacopo Tintoretto, Diego Velázquez, Rembrandt van Rijn, Peter Paul Rubens, and Johannes Vermeer (Vermeer’s The Artist in His Studio, also in the exhibition, was selected by Hitler as the most important acquisition for his proposed museum at Linz). Also shown were 32 Renaissance bronzes, 2 miniatures, 6 Greek and Roman antiquities, 8 ivories, 15 works of goldsmiths and silversmiths (the Cellini gold Salt), 33 vessels of rock crystal and precious stones, 2 pieces of jewelry, 27 pieces of arms and armor, 19 French and Flemish tapestries, and a clock. The works for this exhibition were lent by the Austrian government in gratitude to the American people for the rescue of the works of art from the salt mines in Upper Austria, where they had been hidden during the war. Nearly all the pieces came from the Kunsthistorisches Museum in Vienna and had been acquired by members of the house of Habsburg, rulers from 1273 to 1917.

Accompanied by Dr. Ernst Buschbeck, curator of the Vienna Picture Gallery, and Erich Stromer, curator of sculpture and objets d’art at the Kunsthistorisches Museum, the exhibition continued to New York, Chicago, and San Francisco. Except for a few fragile items not seen in the United States, the same exhibition had already been on view in London, Paris, Zurich, Brussels, Amsterdam, Stockholm, and Copenhagen. The shipment of 101 cases was brought from England by the United States Navy in a refrigerator ship.

Adventures into Space is a 73-minute long documentary made in 1958 and narrated by Basil Rathbone. The following is part of the description found on the Turner Classic Movies website (http://www.tcm.com/tcmdb/title/622913/Adventures-into-Space/ ):

The space adventurers of the 20th century are inspired in their conquest of outer space by explorers of Earth’s polar region, who tested the limits of human endurance in the early part of the century. This film follows the course of several of these adventures using footage shot by the explorers themselves, as well as footage shot by others. After American Robert Edwin Peary led the first expedition to the North Pole in 1909 on foot, several others attempted to be the first to reach the area by plane, which was a relatively new invention. The film follows Norwegian Roald Amundsen’s 1922 attempt, beginning with the construction of two water planes. …

By the 1950s these remote areas have become easily inhabitable with the help of modern technology, enabling scientists and explorers to turn their attention to space exploration. Seeking ways to surpass the limitations of the body in preparation for space life, laboratory animals are sent into Earth’s upper atmosphere to test conditions using new technologies in missiles and rockets. The footage from these experiments leads to the discovery that animals can survive in the Earth’s upper atmosphere despite the lack of gravity. After the Soviet Union successfully launches Sputnik,

the first space satellite, they send a dog into outer space in a rocket-propelled ship, proving that living beings can exist in outer space. The United States’ Jupiter C satellite is launched later in 1958 and provides measurements of meteorites, cosmic rays and temperature. Later that year, United States’ Pioneer satellite reaches more than a third of the way to the moon. Stations around the world register data about the satellite’s positions to assist in future flights. Although satellites cannot provide the final answer to human travel to the moon, they can gather valuable information. While many nations are preparing for this voyage into outer space, a new kind of pioneer and courageous explorer must be found to brave this new territory.

In 1961, Rathbone narrated an animated featurette called The Black Cat.  Twenty-two minutes long, the film was distributed by Continental Distributing. It was exhibited across the country and at the Cannes Film festival.

Boxoffice magazine reported: “Edgar Allan Poe’s classic horror tale of a man brought to the gallows by his nemesis, a black cat, is told through the weird and macabre paintings created by John Fenton. Narrator: Basil Rathbone.” John Fenton designed 50 paintings especially for this film. I have not been able to find a single one of these “weird and macabre” paintings. Here is another Fenton painting, completely unrelated to The Black Cat.

Two Before Zero is a bizarre film made in 1962. I include it here because it is a documentary (sort of). Or perhaps a docu-drama of anti-communist propaganda. Two actors, Basil Rathbone and Mary Murphy, discuss the evils of communism. Accompanying their debate is archival footage of the Russian Revolution, the death of Lenin, the rise of Stalin, the Spanish Civil War, the invasion of Hungary, and Castro’s takeover in Cuba. Bosley Crowther of The New York Times wrote, “With Basil Rathbone, dressed in judicial robes before a large volume on a lectern,

and Mary Murphy, attired in flowing, white virginal robes, as, we presume, the personification of the eternal woman asking questions about Communism, Mr. Rathbone explains Communism’s history and implications. The dialogue, delivered in portentous, often satirical tones, is pointed and cutting but sometimes too high-flown for the shots it is supposed to underline.” (The New York Times, November 1, 1962)

This film can be purchased at Amazon:  http://www.amazon.com/exec/obidos/ASIN/B07SZBJZCN/basilrathboma-20

Finally, I have a vague memory of reading somewhere that Basil Rathbone narrated a short film used to promote tourism in Maine. I cannot find any information on this now, but I mention it in case it rings a bell for any of you. Please feel free to add info on the Maine travel film or other short films in the comments section below. 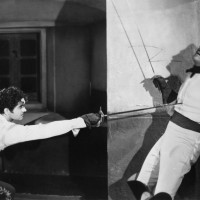