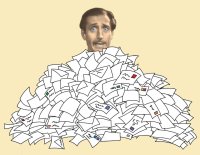 As popular as Basil was, I’m sure he received an enormous number of fan letters. The following letters are just a few of those that were published in fan magazines:

BASIL NO BAD MAN
It seems to me Hollywood is making a mistake in continually casting Basil Rathbone as a screen menace. The fact that he is such a good actor is certainly no reason for typing him. Although he has played every role from Pilate to a modern butler, his characters have all been black-souled scoundrels. On the stage he played Romeo and Robert Browning, but when he went to Hollywood he was cast as the stony-hearted Mr. Murdstone in David Copperfield. And then, when Romeo and Juliet was filmed, was Mr. Rathbone cast in the role he so well portrayed on the stage? No indeed! He was cast as Tybalt, the villain of course. Since Mr. Rathbone is really so attractive looking, and has such a charming manner and engaging voice, it is a shame that he isn’t given a role worthy of his talents—I am speaking of the hero’s part. 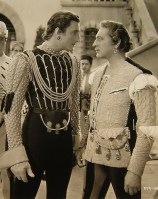 PLAY FAIR
As Picture Play seems unbiased, I find it a good place to air a grievance, so I hope this letter will be noticed by some enterprising producer.
Ever since Basil Rathbone scored such a success with his brilliant lifelike portrayal of Mr. Murdstone, in David Copperfield, he has, with the exception of this role in The Last Days of Pompeii, been typed as a sinister and unsympathetic character. Admittedly there has been some difference in the type of villain he has played, but at the bottom they were essentially heavies.
He may be a very fine villain, but why confine him to these roles? Wasn’t his clever acting as Philo Vance in The Bishop Murder Case sufficient proof that he could play a variety of characters? It is my opinion that he would have made an ideal Parnell as he resembles him more than Clark Gable does. More important, Parnell was known as a splendid orator and surely Mr. Rathbone’s clear, beautifully controlled vice would be perfect for such a film besides giving him a really sympathetic role which would delight all his fans.
Personalities are ten a penny—actors rare—so why not play fair with Basil Rathbone, producers?

BEHOLD THE DAY!
In your moments of gloom and mild insanity, after watching the antics of beautiful Robert Taylor, or hearing the rasping notes of Dick Powell, I respectfully suggest that you hurry to the nearest theater, where Basil Rathbone is appearing and you will be quickly reassured that acting and its technique are not vanishing from the earth.
Mr. Rathbone, an artist to his finger tips, has seldom appeared in really worth while pictures. The insanity of producers is further shown, for here is one of the great of the acting profession, in every way equal to Paul Muni, cast in picture after picture that insults his ability and talents. It is gratifying to know that he appears in Tovarich.
As it is, the greatest box-office attractions can hardly be called actors. Particularly do I refer to Robert Taylor, Dick Powell, and Joe E. Brown. Three more insufferable bores it would be hard to imagine. Perhaps the public has yet to be educated to worth while entertainment. When that day comes, and it will, we shall be rid of the asininity of such players mentioned above.

The greatest piece of acting I have ever witnessed in a theater was the fine work of Basil Rathbone. I’m for him. He was certainly awe-inspiring as the conscience-tortured Pontius Pilate [in The Last Days of Pompeii]. In the sequence after the conviction of Christ he was magnificent and I’ll never forget his cry, “What have I done!”

This final set of published letters begins with the author complaining about not being able to enjoy watching a movie because she was seated behind the Rathbones, who were pointing and talking. Not only that, but Ouida was wearing a tall hat that obstructed the writer’s view! The second letter from this writer includes Basil’s response to the first letter.

A LETTER FROM LIZA
I am annoyed … because actors who go to previews are often so chatty that it is difficult to hear what is being said on the screen. At the Jezebel preview the other night I had to sit behind the party-throwing Basil Rathbones, who enjoyed the picture so thoroughly that not only did they discuss it with each other quite audibly during the entire preview, but they had to point at the screen during tense moments. I thought screen-pointers had gone out with title readers and the dodo bird.
Mrs. Rathbone wore a little inverted flower pot number with quite a wild cluster of feathers sprouting up from it. The pot plus the feathers … must have added a goodly foot or so to Mrs. Rathbone’s height—and need it be said that she did not remove the hat. And me a Bette Davis pushover. I tell you I became a wild young thing, fit to be tied. As Basil left his seat at the end of the preview he said, for the benefit of all who were interested, “This is really a great picture.” I said “I wouldn’t know” and sulked something awful.
I am confused because people, even very sane, sensible people, often call me Liza the Louse.

Liza
(published in the May 1938 issue of Silver Screen) 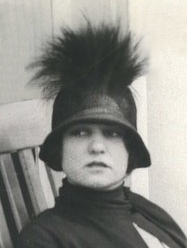 Could this have been the hat Ouida was wearing that night?

[ANOTHER] LETTER FROM LIZA
Remember all those nasty things I said about Basil Rathbone in a recent letter? Well, I’ve got to eat my words, every one of them, and without Hollandaise sauce too. I received the following letter from Basil (oh yes it’s Basil and Liza now, so cozy-like) and I accepted the tea invitation and I haven’t met such mad, merry delightful people ever. Basil can point all he wants to and Ouida can wear Marie Antoinette’s hairdress in front of me at previews and I’ll just think it’s all very cute. Doesn’t it make a lot of difference when you like people!

Dear Liza:
But not Liza the Louse! No, no. Far more appropriate would be Liza the Logical. It’s logical and right that you should object to a “finger pointer,” but oh dear, oh dear, it’s sad that this habit should have caught up with me again. Years ago I was practically thrown out of England for being a “finger pointer.” You know how the English dislike any form of individual enthusiasm. (It’s considered bad manners over there.) Well, my enthusiasm used to take the form of finger pointing.

So, being unable to cure myself of enthusiasm, I remained a “finger pointer” and left for more democratic shores where one could point at anything with boundless enthusiasm and not get into trouble. So you’ve just got to forgive me, Liza, because it’s logical to be enthusiastic about Bette Davis in anything she does and, as you now must understand, I just can’t help pointing under such circumstances.

About Ouida’s hat, I am really sorry. (Just between you and me, it was a hat! Wasn’t it?) The only reason, I presume, that she kept it on all through the show was because if she had ever taken it off and had had to put it on again at the end of the show, in all our enthusiasm, she might have stuck it on back to front. And imagine Ouida at a preview, walking out of the theatre with those feathers bobbing up and down over one eye, making her look like Maugham’s “Liza of Lambeth.”

Anyhow, please do come and have tea with us one day and let us tell you all about the preview of Jezebel which our concerted efforts prevented you from seeing.
Sincerely,
Basil

Isn’t he too, too wonderful!

Liza
(published in the July 1938 issue of Silver Screen) 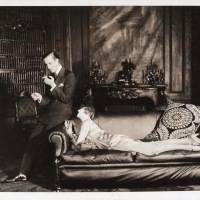 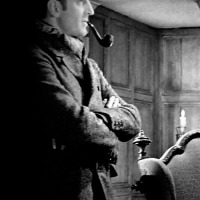 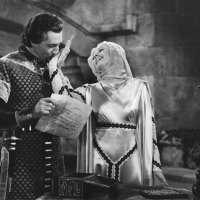